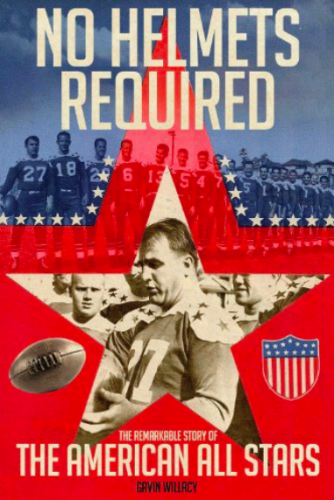 No Helmets Required by Gavin Willacy

Sixty years on from 1950s Los Angeles, No Helmets Required tells the story of 20 young American footballers convinced by entrepreneur Mike Dimitro to fly off around the world playing rugby league – a game they’d never even heard of. Miraculously, the American All Stars competed with the best Australia, New Zealand and France had to offer, and shocked the locals with some stunning victories. Yet beyond the media circus and celebrity adventures, the All Stars had fights and flings, suffered tragic illness and farcical court cases. Dimitro’s mission to establish rugby league in the United States failed in spectacular fashion – though one All Star went on to win the Super Bowl, one became a Hollywood stuntman and another an Olympic champion. One player founded a church; another was murdered. The emergence of their remarkable story coincides with the USA’s first ever qualification for the Rugby League World Cup, in 2013.

No Helmets Required by Gavin Willacy

Rugby League On This Day by Richard de la Riviere

Online Shop uses cookies to deliver the best shopping experience possible, your acceptance of this is important or you may not be able to use some features.