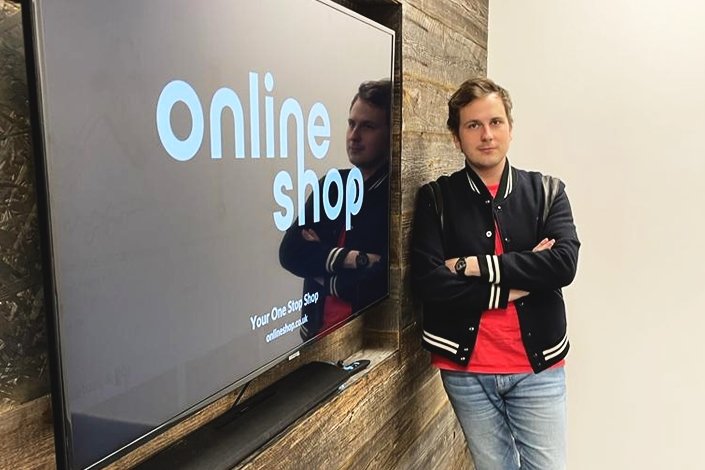 Read the full feature on Yahoo! News by clicking here.

If you asked someone just six months ago what ‘Online Shop’ is or meant they’d give you a general lexicon answer, “it’s a shop that you do for products you need, online”. Fast forward just a couple of months into the future and ask the same people what ‘Online Shop’ is and seven out of ten people would tell you it’s the lean new start-up on the block taking on Amazon and eBay head on without any hesitation.

Online Shop, the brainchild of Lithuanian born, British-American entrepreneur Terry McGinnis has seen immense success since it’s launch just months ago with breakthrough numbers in engagement, customer sign ups and the number of sellers, both big and small pledging exclusivity and their support. Dominating the top search results across search and outranking even the biggest of brands, sales are plentiful and investors seem eager to have the company grab more and more retail market share, and it’s only the beginning.

When asked, founder and Chief Executive Officer, Terry McGinnis made the following statement:

“The company is doing very well, considering we’re so new, firstly we wanted to see market fit and if it would even be possible to go head to head with some of the bigger competitors out there; the market response has been incredible. Both big brands and smaller, independent shops and entrepreneurs who are using us as a way to do more, sell more and reach more customers, have nothing but positive things to say. We’re trying to be cutting edge and outperform our competitors in every aspect of what makes e-commerce great.”

Online Shop, the domain alone, which according to private reports by GoDaddy had been acquired for a staggering £3.7 million, has seen investment pour in from notable British investors such as Robin Vauvelle who has seen immense success both in the manufacturing, real estate and venture capital fields across Europe, East Asia and North America. The company now boasts a 20,000 square foot fulfilment centre in the heart of England, plentiful office space to house up to 20 new staff by end of 2021 and start of 2022 and brand loyalty unseen like anywhere else.

The company now plans to roll out it’s own utility token on the blockchain which will act as a form of reward system that will be able to be used across Online Shop and it’s network of partners. The company is now testing taking payments in crypto currencies rather than the traditional fiat route.

“Blockchain is the future, so is decentralised finance – our current monetary system is built on a very brittle and predatory house of cards, controlled by institutions and people who were able to cheaply raise capital and grow wealth through very discriminatory practices, and it’s been clear, to our generation especially, that it’s absolutely unsustainable in any way, shape or form. This is why I’m a big believer in blockchain, crypto and other forms of decentralised practices that benefit society. We’re working on launching a utility token that will re-define customer loyalty, rewards, not only on Online Shop but our network of partners too, which share our vision of the future.” stated Terry.

Online Shop is launching the SHOP token, and it is the first business of it’s kind to utilize crypto as a form of utility rather than investment, in which users will be able to gather SHOP tokens and use them in various ways from gaining discounts, receive rewards, ability to purchase products at discounted rates from select sellers, and so much more. Imagine if your clubcard made you air and hotel points on the side and allowed you to use them across hundreds of partners. The platform will also include the ability to sell digital assets such as NFTs and a lot of benefits for music artists and other types of artists to broaden their horizons and be rewarded for the products they sell, whether it be art itself, or things such as merchandise with several notable artists already adopting the platform for their merchandise sales.

Investment analysists expect the company to be on the list of companies to watch for to reach unicorn status within the next three years with private investors, equity and venture capital firms knocking at the Harrogate office doors for a chance to be part of the business’ fundraising efforts.

In a closing statement, Terry is noted as stating “It’s only the beginning, the response has been absolutely amazing from every side, there’s a lot of people that support us – it’s what inspires us at the end of the day, we’re still only dipping our toes and testing the waters. There’s still a lot more to do.”

Vision of the Future: Get Paid in Bitcoin

How to Sell Online with Online Shop